She wasn’t hesitant in the least.

Going through the procedure was also for his protection.

Feng Yunian only wanted a little something every time, but she always tried to stuff him with a mountain of benefits.

This… let her remain as empress for a few more months.

He guessed that she would move the entire world for him by then.

Feng Yunian got the status he wanted. Step by step, he began moving towards the center of power.

He thought that he would be satisfied.

But looking at the woman before him, who had lowered her guard entirely towards him.

The emptiness in his heart grew.

Was she indeed not afraid that he would betray her after taking everything she owned?

Saying this, she began to pick up the crab meat and feed him.

Feng Yunian froze for a moment. He looked into her beautiful eyes that were filled with expectations.

He opened his mouth and ate the food she gave him.

Truthfully, he hated being fed because it made him feel shame, as though he were a pet.

But when she fed him, it made him feel like he was cherished and pampered.

The crab meat was a little cold, but his heart was warm.

Being a loyal dog was great, ah; the favorability went up when it was told to.

She had never had such a leisurely and relaxed world plane.

After eating and drinking a few cups of wine to warm the stomach, the outside was dark.

The snow fell even more heavily.

Taking advantage of the excellent atmosphere, Bai Weiwei grabbed the chopsticks and tapped against her wine glass, loudly singing a few songs off-key.

“Love you until death2…”

Feng Yunian was still listening at first, but the more he heard, the more it felt bold and absurd4.

Where did such licentious lyrics come from? They were simply unpleasant to listen to.

He should be disgusted, but looking at her happy smile, his heart also couldn’t help but feel better.

Suddenly, an attendant from outside the resting chambers cautiously came in to report, “Your Majesty, the high priest has come.”

Bai Weiwei drank wine, seeming drunk but not drunk. Her flushed face was even more gorgeous.

She smiled coldly. “Yo, what an honored guest, ne. Ask her to come in, ba.”

When Feng Yunian heard this name, his eyes flashed with cold, killing intent.

Leng Lianqing, dressed in a red ceremonial robe5, walked in with a cold face.

She was too arrogant as she bowed to Bai Weiwei. “Your Majesty, I’ve come to seek justice for the officials outside the palace.”

The Leng family held significant influence over the court. So long as Bai Weiwei still wanted to manage the country.

She first had to bow her head to these court officials.

She bent her body and waited for a long time, but she didn’t hear Bai Weiwei’s voice telling her to rise6.

If the empress didn’t speak, she could not breach etiquette as one who led the sacrificial ceremonies.

She could only maintain the bowing position, bending over until her spine was about to pop out.

It was only after a long time that she heard Bai Weiwei’s calm voice. “You may rise.”

Leng Lianqing let out a sigh of relief. But when she straightened her body, she saw a familiar figure sitting beside Bai Weiwei.

His hands rested on the table. His clean and gentle face was snow white and ice-cold, and his pupils were pitch-black, to the point of seeming demonic.

“Is this not a remnant spawn of the previous dynasty?”

Seeing that it was an acquaintance, Leng Lianqing’s smile was that of having victory within her grasp.

“Your Majesty, the word is spreading outside the palace that a demon consort7 has appeared by your side and cast a spell on you, causing you to slaughter innocent subjects.”

This name made Feng Yunian’s face grow even colder.

He killed so many people and stirred up the entire center of power.

Calling him a demon consort was still relatively modest.

Leng Lianqing looked disdainfully at Feng Yunian. “I wondered who the demon consort was, but I didn’t expect it would be such a cheap thing.”

4: 不靠谱: not relying on music sheets to play music; can also mean unconventional, or straying away from accepted norms.↩ 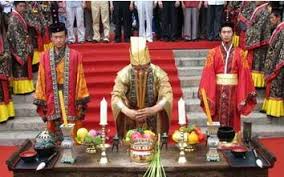 6: When bowing to a superior, you’re not allowed to get up until you’re told you can.↩

7: 妖妃: the same yao fei as used in this arc’s title. 妖 (yao) can refer to a monster, devil, or witch, or it can also describe someone who is charming or coquettish. Given the context, it’s possible that Leng Lianqing is using it to refer to a demon/devil/monster/supernatural and evil being. (it might also be the intent behind the arc’s title, but too late now lol).↩

Cheese: preemptively lights a candle for our dear cannon fodder. looks like you’ll have to pass on that red robe to someone else soon

View all posts by Piper Panda